Bum Notes from the Brass section: In 1960s France remembering the fallen

Posted on October 2, 2014 by rogerpinnock

Music is often associated with ceremony. A 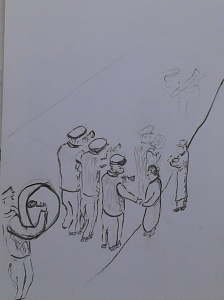 nd few ceremonies, especially national ones, are without music. Brass bands are a useful portable musical accessory for memorials in fields, town centres – wherever. Eastbourne Silver Band (ESB) had its share of call-outs to attend. Fecamp in France, for example, was memorable for many reasons.

Eastbourne was twinned with Fecamp, a town on the Normandy Coast. We were invited for a week at Fecamp’s expense to play at the liberation anniversaries of Fecamp, Dieppe, and other local villages and towns. Great. A week in France. Who could say no? Certainly not me.

The first Sunday, we were to play at a mass held to commemorate the liberation of Fecamp, held in a huge cathedral-sized church. We set up stands etc. in the choir, the area between the altar rails and the steps of the high altar. Whispered instructions told us to behave – no breathing down the instruments, rattling, fidgeting. “This is serious!”. We got the message. The mass continued now in French, now in Latin, now hymns accompanied by the organ, for well over an hour. A man from the committee had been detailed to show us when to stand and sit without a sound, and time passed slowly. The urge to fidget became ever stronger.

Finally, our turn. We were to play at the most solemn moment of the mass, when the congregation came forward to take Communion. The Band Master had chosen a theme and variations on the popular hymn, Abide with Me. Nothing to tax us at all, well within range and capabilities. Except the whispers insisted “No breathing down the instruments, no tune up, no warm up – just straight in at the drop of the baton!”

Perhaps it was the place, the occasion, but I can still run the little memory clip of those moments. Every instrument of the band spoke at once: perfectly in tune, time, dynamics, balance – except mine. Nothing came out. I was about to catch up on the second or third note when I heard the soft echo return from the stone walls. Magical? Holy? Spiritual? There is no sound that can better an English brass band doing justice to a solemn hymn. The sound of the band rose up gently filling the space with an amazing acoustic, I was mesmerised. I dare not join in for fear of disturbing the balance. It not only made my heart sing but seemed to have the same effect on the congregation – which was many hundred strong in this huge church.

Tuesday should have been our day off, but the mayor of a neighbouring district had seen the coverage in the newspapers, and contacted the organisers. ”We have a war cemetery here with a British section. Would the band like to pay their respects? We’ll lay on lunch”.

Then the trouble started. Band members were both male and female, but only the serving men had been trained to do a slow march. We youngsters and the ladies needed lessons. The Navy guys said do it like this. The RAF boys jeered. And the army broke up into separate groups by regiment each insisting that their slow march was the authentic one. Words were said and voices raised, but no agreement reached. In the end the order was “Do it as you were trained. And for the others choose any style but keep in time”.

The coach came. We lunched – with wine – and were deposited at the cemetery gates where we lined up. The (strange) order rang out “By the left, slow, march”. And the commotion began. No, not in the band but among the bystanders: journalist, photographers, committee members, the curious and a dog. “What kind of march is this? You are insulting your own brave countrymen!”. It probably did look a shambles – four or five different steps made with precision and others lackadaisical. The eldest, our octogenarian, couldn’t hold his balance properly much to his growing annoyance. The air around him became ripe. Good job the French didn’t understand him or there could have been an incident. It was fortunate that we had a journalist from the Eastbourne Gazette who was able to give an explanation.

The mood of the band became sombre as we marched through the lines of tombstones of the fallen. Men the same age as the younger of us – dead at 20, 19, even 18. Serious food for thought, and time to explain the age dynamics of the band. The year of this trip was 1962 or 3 and I was 22 or 23 years old. As the ages of the bandsmen ranged up to 80+, most of those who were over 40 had served in either WWI or WWII – totally within living memory of everyone present. Although the names on the stones were not known to us, they reminded us of comrades, fathers, brothers etc. who had died. We later learned that our journalist had landed on the Marlborough harbour on D day + 3. “There but for the Grace of God go I”. We did not taunt him again.

We arrived at the British section and the memorial cross, fell out and re-formed ready for our short ceremony. The principal member of the saluting party was a member of the band. “How come he missed the march?” we whispered (in slight revolt). The answer was not long coming back. A sergeant major in the First World War, he was too old to serve in the second. But his son did serve – and was killed a short time after the allies had broken out from the beach and into France. He was buried in an allied cemetery a hundred or so miles inland. This would be the only opportunity for the father to salute his son and the others who had fallen so near to his boy. Stunned, we came to attention.

There was one more shock. After the Last Post, exhortation, 2 minute silence and reveille, we formed up and quick marched out of the cemetery to Colonel Bogey. In the coach we challenged this decision. “Can it right to thumb our noses in the graveyard?”. We all knew the vulgar “alternative” words. The answer was: “The ceremony is for the fallen. When we leave, we play for those who are in uniform today . What better than a quick march down to the pub?”. “Yeah. OK we get that” – but the French don’t have pubs so we just had to improvise.

On the final day, we were told that we would be the first English band to march through Dieppe since the liberation 20 years before. With this boost to our ego, we boarded the coach without noticing that it was only 10 in the morning and we were not due on parade (with 4 or 5 other bands) in the main square of Dieppe until 3 o’clock.

We disgorged from the coach some way out of town, fell in and marched off down a side street, playing our first march of the day. We were ordered to a halt – nowhere. In the middle of a side road with houses on both sides, and no distinguishing marks. We played the French and British national anthems, and set off again. After 5 or minutes or so the same thing happened again. This continued for half-an-hour or so. Muttering in the ranks could no longer be ignored. “We are honouring the memory of those brave men and women of the French resistance movement who had died at the hands of the Germans – sometimes under the most unspeakable circumstances”. All our resistance faded. We carried on for a further hour and a half. The lunch and wine made up for it.

There was a last sting in the tail. Leaving the restaurant we formed up and marched to the square and main parade. No longer on side roads, we were on main streets through the shopping area and normal Saturday traffic. We hugged the kerb. This route was lined with people, three or four deep. Many were out shopping, but a significant number started to take notice of the band and we struck up a march to keep us going. But our tune was not what that they wanted us to play. Recognising that we were English, they sang back to us “It’s a long way to Tipperary”. We didn’t have the music or we would have led them. A cornet player, I was on the outside column next to the kerb, and was startled as I felt my uniform being pulled. I turned and stared into the eyes of an elderly lady who stared back at me through her tears and stuttered “Les Anglais – Merci, Merci!”. What had she lived through and endured? Who had she lost?

Whether it was this incident or an accumulation of the week, but I don’t remember much of this last parade. (It wasn’t the wine as I had been put on strict rations following the incident after lunch at the Château). I returned home quite changed.

Chairman of Ashford Sinfonia
View all posts by rogerpinnock →
This entry was posted in Uncategorized and tagged Eastbourne Silver Band, Fecamp, Members' blogs. Bookmark the permalink.